Throughout their academic life, children will have to face the onslaught of scientific theories, teachers, professors, and peers who will pressure them into leaving behind the "primitive and uneducated" belief that Earth was created by Almighty God.  A recent Gallup poll reveals that over 60% of Americans believe in the theory of evolution - many of them believing that it is the PRIMARY explanation for where life on Earth comes from.

Earlier this year, Ken Ham, a well-known Christian apologist debated the outspoken evolutionist, Bill Nye (the Science Guy).  It was a classic  (and public) Creation-versus-Evolution debate.  Nye is more than just a former TV personality.  He was also featured in a YouTube video last year titled “Bill Nye: Creationism Is Not Appropriate For Children.”  Click this link to watch the video.

Nye says, “in another couple centuries,” the creationist worldview “just won’t exist,” saying “there’s no evidence for it.”

The battle for the hearts and minds of the next generation begins long before kids enter a high school or college biology class.

Remember the story of The Emperor's New Clothes?  It was a small child who saw and pointed out that the king had no clothes on at all.   Kids are not dumb.  Even if parents choose not to discuss it, children will soon recognize that the theory of evolution does contradict the Bible.  So, what can Christian parents do to counteract the push and pull of society to walk away from the Bible and embrace something else as the ultimate authority on the origin of life?

I don't think it is a simple answer.  It all starts with teaching your children clearly what the Bible says about Creation.  Every once in a while, a tool comes along that helps to aid in that pursuit.  I came across such a tool recently, and wanted to share it with you. 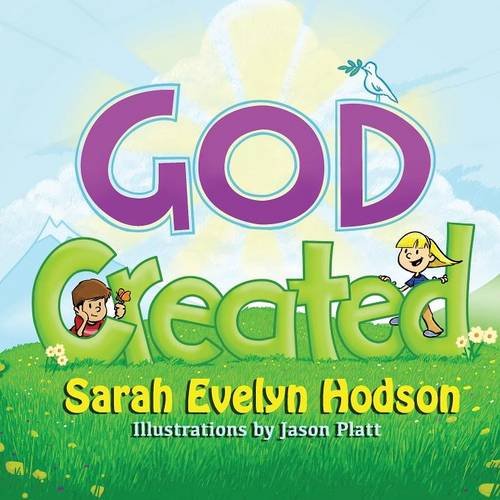 God Created is a short picture book that is aimed at ages 3-8 years old.  It is well done with incredibly vivid illustrations.  It is written by Sarah Evelyn Hodson and illustrated by Jason Platt.  Sarah works as an early intervention speech-language pathologist in addition to writing children's books.  She is a mom of two children.

You can purchase a copy of this book by clicking here!   Also, Sarah was kind enough to send me a copy to GIVE AWAY for free!  If you would like to be entered into the drawing, please email me at brian@highvoltage-kids.com.  I will announce the winner next week!